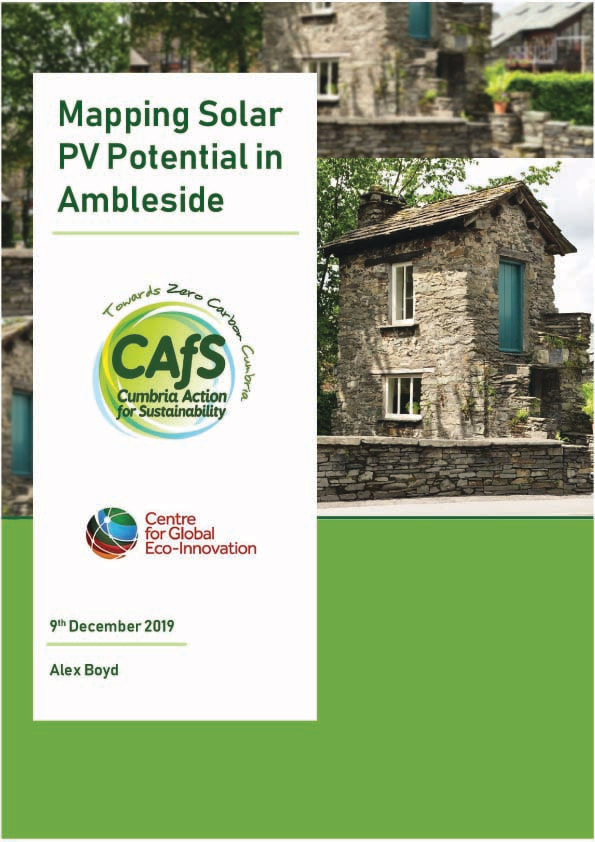 Making Ambleside Carbon Neutral, became the ambitious goal of some of the Ambleside Action for a Future (AAFAF) group early in 2019.

In September 2019 a feasibility study was commissioned by the A to Z group to look at the potential for generating electricity using solar photovoltaic panels on roof spaces in Ambleside.

Alex Boyd who recently graduated from the University of Lancaster with a master’s degree in physics, astrophysics & cosmology; took up the challenge.  With the support of CAfS (Cumbria Action for Sustainability) and the Centre for Global Eco-Innovation based at Lancaster University, Alex undertook to devise a methodology using publicly available data which would allow for whole-settlement, large-scale assessments of roof space and also identify the maximum generating potential of solar photovoltaic panels that could be installed.
The method was designed with the intention that it could be used for any town, and used LiDAR (basically RADAR but with light) data from satellite images which enabled Alex to identify all roofs big enough for solar panels.
He then eliminated various sites from consideration using a dizzying array of parameters. Any roof that was too small, too steep or too shaded was cast aside and only prime rooftop real estate used for the calculation.
After combining this information with Ambleside’s admittedly modest record of sunshine, he managed to calculate a total potential energy output of 3.5 GWh. The equivalent of brewing 175 million cups of tea.

Alex presented his findings to AAFAF on 6th January 2020.